Living in funny old Dee Why has had its moments.

I’ve been lucky enough to capture some photos of the wildlife here include one day after a storm and a number of strange jellyfish and other creatures were washed up onto the beach. 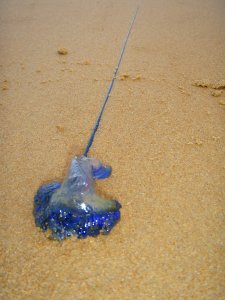 There were hundreds of blue stingers or blue bottles at the hide tide mark with their long tentacles plastered to the sand trailing back to the waterline. The Norwegian was speaking to a woman who grew up here and she said as a child they used to pop the sun dried stinger bodies for fun like we would pop bubble wrap.

There were quite a few clear jellyfish as well as these strange creatures that looked like frilly, mini, blue ghosts, perhaps baby blue bottles? They moved occassionally.

The weirdest thing was a small rock that was encrusted with the moving mouths of a number of shellfish. They were opening and closing, dark red creatures, like thick wet feathers, were pushing in and out in a hopeless fashion. If I were the anthropomorphising kind I would say they were thinking, ‘oh shit, where did all the water go?’

← Home Sweat Home
The importance of a relaxed groom →

She blogs on for The Writing Cooperative on Medium